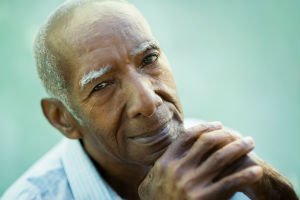 Glaucoma is often referred to as a "silent thief of sight.” This is because most types of glaucoma typically cause no pain and produce no symptoms. Glaucoma often progresses undetected until the optic nerve has already been irreversibly damaged, resulting in varying degrees of permanent vision loss.

Glaucoma occurs when increased intraocular pressure damages optic fibers within the optic nerve, causing blind spots to develop. There is a space in the front of the eye called the anterior chamber which is filled with a clear fluid. This fluid flows in and out of the eye continually to nourish nearby tissues. Normally the fluid leaves the anterior chamber at the angle where the cornea and iris meet. The spongy network located there filters the fluid as it leaves the anterior chamber. If the fluid doesn't drain properly, excessive pressure builds up to dangerous levels and can damage the optic nerve. Vision loss from glaucoma can be prevented if caught in time.

Glaucoma is the second leading cause of preventable blindness in the United States. In fact, it accounts for 9 to 12% of all cases of blindness, and is the most common cause of blindness among African‐Americans, who are five times more likely to get glaucoma than whites. Two and one‐half million Americans over age forty have glaucoma, eighty thousand Americans are blind from it, and one million are at risk for blindness because they don't know they have it. Although glaucoma can't be prevented, blindness resulting from glaucoma can. 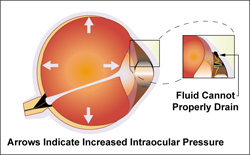 Glaucoma can be primary or secondary. The primary condition can't be attributed to any known cause, but the secondary condition can usually be traced to some cause such as a previous illness or injury. Secondary glaucoma usually develops as the result of other medical conditions. It sometimes results from eye surgery, advanced cataracts, eye tumors, or eye inflammations. Corticosteroid drugs can also cause glaucoma.

In Open‐angle Glaucoma, this angle is open, but fluid passes too slowly through the filtration area to the drainage canals. As the fluid builds up, pressure rises and causes optic nerve damage which results in vision loss.

In Closed‐angle Glaucoma, the angle between the cornea and iris becomes blocked by part of the iris. Fluid cannot leave the eye and pressure builds quickly. The patient may experience pain and nausea along with redness of the eye and blurred vision. Patients must receive immediate medical attention to clear the blockage and improve the flow of fluid. Without treatment, blindness can occur in just a day or two. An acute form of glaucoma, this condition is rare and tends to be hereditary.

Patients with Neovascular Glaucoma (NVG) may be asymptomatic, but more typically presents itself with a chronically red, painful eye which often has significant vision loss. NVG is categorized as a secondary glaucoma and usually associated with some type of vascular disease such as diabetes, hypertension, or carotid artery disease. NVG is a potentially devastating glaucoma, where delayed diagnosis or poor management can result in complete loss of vision or, quite possibly, loss of the globe itself. Early diagnosis of the disease, followed by immediate and aggressive treatment, is imperative. In managing NVG, it is essential to treat both the elevated intraocular pressure (IOP) and the underlying cause of the disease.

A rare form known as Pigmentary Glaucoma occurs when pigment from the iris breaks off and blocks the drainage angles, preventing aqueous humor from leaving the eye. Over time, the inflammatory response to the blocked angle damages the drainage system. You are unlikely to notice any symptoms with pigmentary glaucoma, although mild pain and blurry vision may occur after exercise. Pigmentary glaucoma affects mostly white males in their mid‐30s to mid‐40s.

Childhood Glaucoma is rare and is thought to be hereditary. It may start in infancy, childhood, or adolescence. There are few symptoms in the early stages. However, if left untreated, blindness results.

Congenital Glaucoma: This inherited form of glaucoma is present at birth; with 80% of cases diagnosed by age one. These children are born with narrow angles or some other defect in the drainage system of the eye. It's difficult to spot signs of congenital glaucoma, because children are too young to understand what is happening to them. If you notice a cloudy, white, hazy, enlarged, or protruding eye in your child, consult your eye doctor. Congenital glaucoma typically occurs more in boys than in girls. Symptoms include tearing, light sensitivity, and cloudiness of the cornea. Congenital glaucoma can affect one or both eyes.

Most people don't have any symptoms from glaucoma until they begin to lose their vision. As the optic fibers are damaged, blind spots began to appear in the vision. This usually begins occurring from the side causing the person to lose his or her peripheral vision. Because it happens so slowly, the patient often doesn't notice the vision loss until considerable damage has occurred. Blindness will result if too many nerve cells are destroyed. Other symptoms of glaucoma include the inability to adjust the eye to darkened rooms, difficulty focusing on close work, rainbow colored rings or halos around lights, and the need to change eyeglass prescriptions frequently.

If you are experiencing some of the symptoms described here, it does not necessarily mean you have glaucoma. However, if you experience one or more of these symptoms, you should contact your Greenville eye doctor for a complete exam.

If you have any of these risk factors and notice any changes in your vision, you should contact your eye doctor immediately.

To check for glaucoma, the intraocular pressure (IOP) in the eye is checked using a tonometer, which has a pressure‐ sensitive tip that is placed gently near or against the eye. Some ophthalmic practices use a test where a brief puff of air is directed onto the eye and the resistance of the eye to the puff of air is measured.

In some cases, the doctor may use a short‐acting anesthetic to numb the eye for this examination. Elevated intraocular pressure is sometimes called ocular hypertension, meaning the intraocular pressure is higher than normal. Although this doesn't necessarily mean you have glaucoma, it does mean you may be at increased risk and should have regular eye exams.

The ophthalmologist may use a gonioscope to inspect the drainage angle. It has a special lens that is used to examine the area between the iris and cornea for blockage. By dilating the eye and looking at the optic nerve with an ophthalmoscope, the eye doctor can evaluate nerve damage and look for larger than normal "cupping" of the optic nerve; the larger the cup, the greater the risk of glaucoma.

There is no cure for glaucoma, but it can be controlled. Eye drops with medication aimed at lowering IOP may be tried first to control glaucoma. Depending on severity, treatment can involve surgery, lasers, or medication. Once a diagnosis of glaucoma is made, treatment will most likely need to continue for the rest of the patient's life. In addition, patients must have regular eye exams to ensure that their glaucoma remains under control. Although this may seem like a great deal of trouble, it is preferable to the alternative ‐ blindness.

Treatment focuses on lowering intraocular pressure to a level that the ophthalmologist thinks won't cause further nerve damage. This level is known as the "target pressure." Target pressure may differ from person to person and at different times in a person's life.

Glaucoma eye drops often are the first choice over glaucoma surgery and can be very effective at controlling IOP to prevent eye damage. If you are a good candidate for glaucoma eye drops, you may be prescribed more than one type to achieve the best IOP control. In fact, many types of glaucoma eye drops can enhance the effects of other types. Topical medications include eye drops, wafer‐like strips of medication called inserts you put in the corner of your eye, and eye ointments. Oral medications may be in the form of pills or tablets. Topical medications control or reduce intraocular pressure in one of two ways. Miotics and epinephrine compounds increase the outflow of liquid from the eye. Beta‐ blockers, carbonic anhydrase inhibitors, and alpha‐adrenergic agonists are designed to reduce the amount of fluid produced in the eye. Prostaglandin analogs, a new group of drugs, reduce intraocular pressure by working near the drainage area of the eye to increase the secondary route of fluid outflow. The most common oral medications are carbonic anhydrase inhibitors, which slow production of fluid in the eye. Generally, glaucoma medications need to be taken several times a day. Taking medications as prescribed is very important. Because glaucoma produces no pain or symptoms, people may forget to take their medication or be tempted to stop it. The result will be damage to their vision.

Although side effects of most glaucoma medications aren't serious and usually disappear, they should be discussed with the doctor. They may include blurred vision; headaches; stinging or redness of eyes; changes in pulse, heartbeat, or breathing; mood changes; changes in sexual desire; tingling in fingers and toes; drowsiness; and loss of appetite. People with light‐colored eyes who are taking prostaglandin analogs may experience a change in the color of their iris.

Sometimes surgery is necessary to help control glaucoma. The type of surgery depends on a number of factors including type and severity of glaucoma, other eye problems, and general health conditions. AEC utilizes the most advanced instrumentation for the early diagnosis and follow‐up of glaucoma. The Heidelberg Retinal Tomogram (HRT) uses laser imaging to record optic nerve appearance and changes which may occur over time due to glaucoma.

Laser surgery is usually done on an outpatient basis. Eye drops are used to numb the eye. There is little discomfort, so eye drops are the only anesthesia needed. Little recuperation is needed although the patient may experience some local eye irritation. Normally the patient can resume normal activities within a day or two.

Trabeculoplasty is most common surgery used to treat open angle glaucoma. The ophthalmic surgeon uses a laser to place "spot welds" in the trabecular meshwork, or drainage area of the eye. This stretches the drainage holes in the meshwork and allows the fluid to drain more freely.

Iridotomy is used to treat closed angle glaucoma. The Greenville glaucoma surgeon makes a small hole in the iris, allowing the fluid to move more freely in the eye.

Cyclophotocoagulation is used to treat advanced or aggressive cases of glaucoma. A laser beam is used to freeze selected areas of the ciliary body, which is the part of the eye that produces the fluid. This procedure reduces the production of fluid.

Incisional surgery may be done if vision loss is rapid or medication and/or laser surgery fail to lower intraocular pressure enough.

Filtering surgery is done at an outpatient center or hospital. The patient receives a local anesthesia and may be sedated. The surgeon then removes a tiny piece of the wall of the eye to form a tiny hole. The fluid can then drain through the hole, reducing intraocular pressure. The bloodstream reabsorbs the fluid. The surgeon may place a tiny tube or valve in the eye through the small hole in the sclera. This valve acts as a regulator. When the pressure reaches a certain level, the valve opens to allow fluid to drain out and reduce the pressure. The recovery period for this type of surgery is short. The patient will need to wear a patch for a few days and avoid activities such as swimming that expose the eye to water. The patient will also need to avoid heavy exercise, straining, or driving.

Possible complications from surgery include infection, bleeding, undesirable changes in intraocular pressure, and loss of vision.

The material contained on this site is for informational purposes only and is not intended to be a substitute for professional medical advice, diagnosis, or treatment. Always seek the advice of your physician or other qualified health care provider.